Surfing skill runs remarkably deep nowadays and regardless of age, anyone willing to get involved can have an impact. From 50-year-old tour veterans to 16-year-old rookies, age really is just a number. And that also goes for creating images.

Meet Byron McLoughlin, 17, a young photographer and videographer from Sydney who inertia discovered the chronicle of the city’s northern beaches and its surfers with his lens. As you can see in the gallery above, the child has a gift for both composition and timing. And a fantastic understanding of light at a relatively young age.

“I’m pretty stuck on surf photography,” he told me. “I have no sense of accomplishment in other niches. I tried a lot and it didn’t give me the same spark as when I connect with my subjects in the water.

whether young naivete, or outright courage (or both), McLoughlin is willing to put himself in danger to get shot. He has found a specific niche in aquatic photography which he feels suits him perfectly. “I try to avoid getting crushed by the waves, but it happens,” he says. “It’s a lot more leg work in the rips and swimming to get into the right spot/position. Sometimes I try to push the envelope by taking a wide angle or purposely shooting ahead of the wave to inevitably get caught inside for a different perspective. It’s actually cool sometimes to test your fight or flight reaction to see how long you can hold your breath or how to try to stay calm and not panic. It’s also cool to try and swim as far as possible, relax there, and wait for the chaos above to unwind. 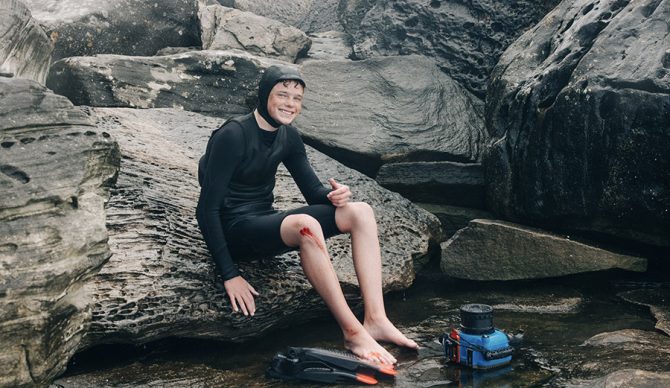 This kid is ready to put it on the line. Photo: Courtesy of Byron McLoughlin

McLoughlin decided to skip traditional high school to pursue his dream (he’s taking college classes online), which seems like a good move. The kid is good at filming surfing because he understands the art. Unequivocal. “I discovered photography as a surfer,” he says. “When I was in the queue watching other random surfers and watching random voids go by, I had these visions where I was blinking and pretending to take pictures, which is weird because I couldn’t watch them afterwards. I had a camera so I could look back on those moments. It all started with terrestrial photography. I explored that, but there’s not much you can do. It got boring and my job was like everyone else’s, so I got a waterhouse and went from there.

The young Aussie keeps himself busy working on other freelance photo projects, but his focus is on one thing: photographing the waves. And on the face of it, his work has a chance to help define the genre in the future.