Fujifilm’s X-H2S is a photographic weapon

I’ve been a fan of Fujifilm for years, but the poor focusing of my aging X-T3 camera started pushing me towards Sony because of its legendary autofocus.

Prior to the release of the X-H2S, rumors swirled that this camera would take Fuji’s autofocus to the next level. I was skeptical, but when I finally got a chance to test the new camera, I didn’t hesitate to grab it, and Fuji didn’t disappoint.

My faith has been restored and I am thrilled that this technology is making its way across the range. This is a game-changer for the brand, and the new X-Trans V sensor set the tone for a much more competitive era for the Japanese camera giant.

Who is the XH2S for?

Dressed up with the extra battery grip and fan attachment, the X-H2S is a beast.

Like many technologies, Fujifilm’s camera line doesn’t have the most intuitive naming scheme. All you need to know is that XH cameras are the premium mirrorless systems. The ‘S’ at the end of the name indicates ‘Speed’ and signifies that this camera is more video oriented.

It’s still a mirrorless camera, but the video cornerstone is important because Fujifilm cameras aren’t often released in this space. The apparent video backbone of the new flagship represents a fundamental change for the company and the technology it uses.

With seven stops of stabilization, outstanding color science, and a minimal rolling shutter, this camera has the right tools to shoot great video with minimal kit. On top of that, it also has the best autofocus ever developed by Fujifilm and the ability to shoot in 6.2K, making it easy to crop for publishing to different media.

watch the video in 4K on our YouTube channel.

I’ve been shooting with an X-T3 and an X-S10 for years, and while both of these cameras produce great shots, I find I often need to work for them. When using autofocus, I re-shoot two or three times before it works the way I want it to. The X-H2S, by comparison, feels smarter, lacks focus less and clings to what I want more consistently.

All that packed into a single unit means it’s pricey ($3,200), but after almost two months with the camera, I’d say that cost is well worth it. If you’re a casual videographer, you might like the standard X-H2 or the new X-T5. Both are capable video machines, but with more emphasis on photography and a lower price. However, if you want to grow a video camera over the next few years, the X-H2S can’t be beat.

My favorite things about it 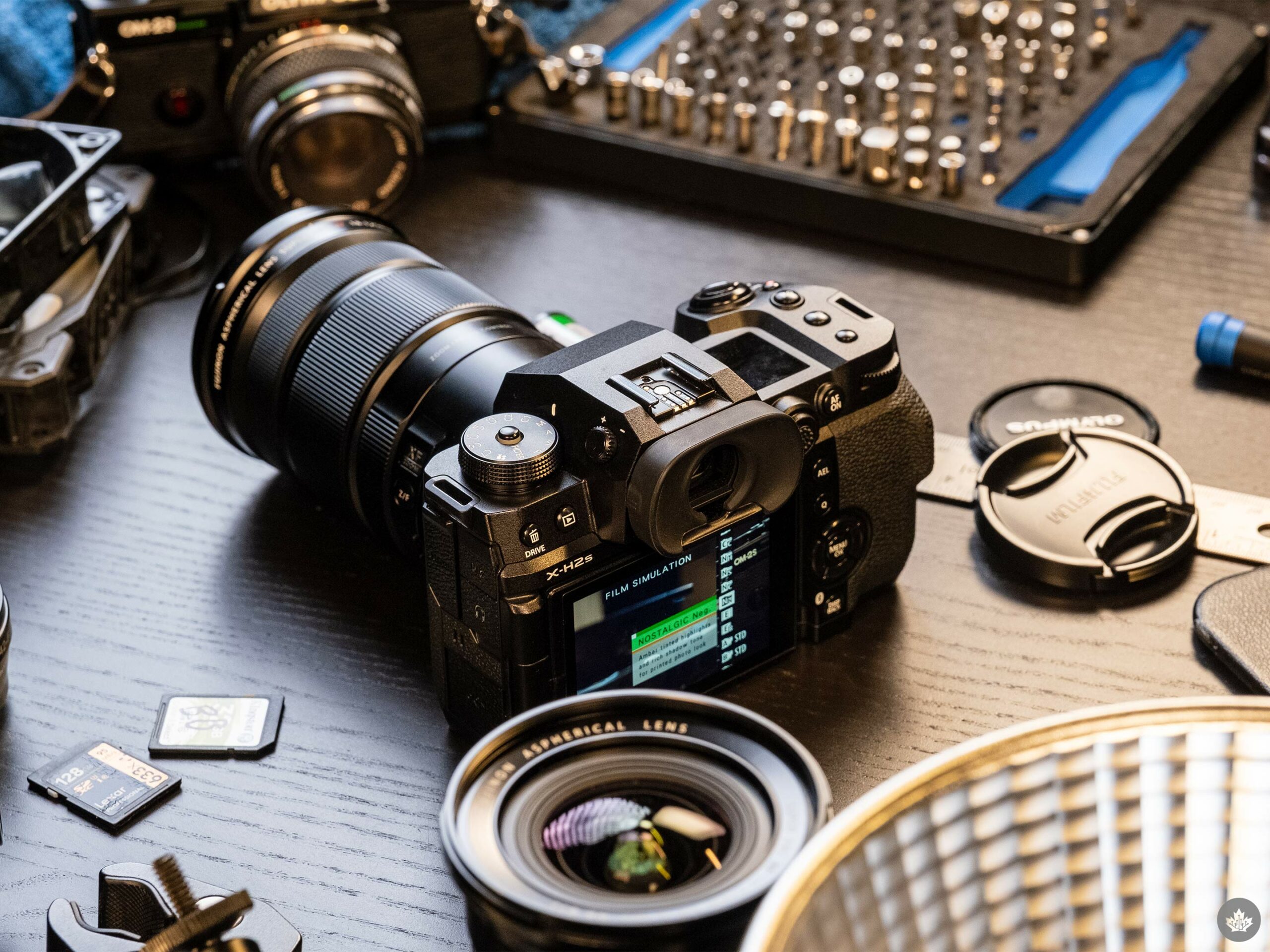 Regardless of its size, the X-H2S is lighter than it looks.

This camera is a beast, but for me the best thing is the reliable autofocus. If the subject is wearing sunglasses, moving or in a busy area, the X-H2S will just work. I can’t wait to test this new system in a smaller package like the X-T5 or a potential X-S20. The autofocus wasn’t perfect, but it’s a pretty big step in terms of reliability.

The second best thing about this camera is the plethora of custom buttons and dials. There are seven custom modes on the PSAM dial. I only managed to fit four in my time with the camera, but with a bit more time I could have easily put all seven in place. Switching quickly between slow motion, standard motion, photos, different color profiles and preset shooting modes was a great way to increase my efficiency. 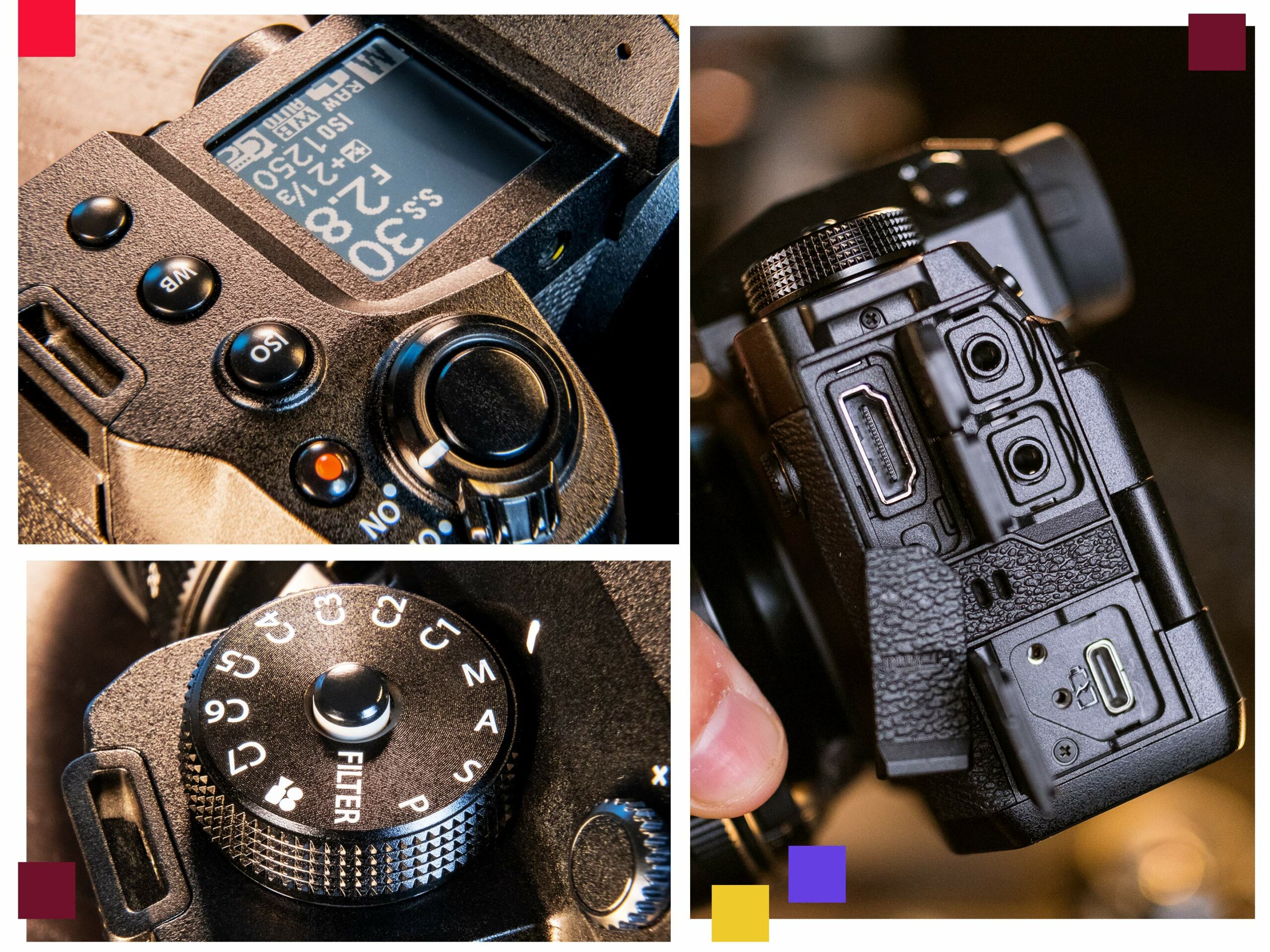 The in-camera microphone is also much better than previous models.

One of the great things about Fujifilm cameras is that you can set custom color profiles. However, it is cumbersome to activate and requires a lot of work to turn it on and off. On my X-T3, I don’t use it much. However, since there are seven custom slots on the X-H2S, I can preload two or three of them as different movie sims and jump into them for fun. It’s a small advantage, but it unlocks a bit more fun with the camera.

Across the camera from the top dial, an e-ink display shows your shooting settings. When the camera is turned off, the remaining battery life and SD card space are displayed. Opening my bag and seeing the camera battery at a glance seems like a small thing, but it’s extremely convenient. 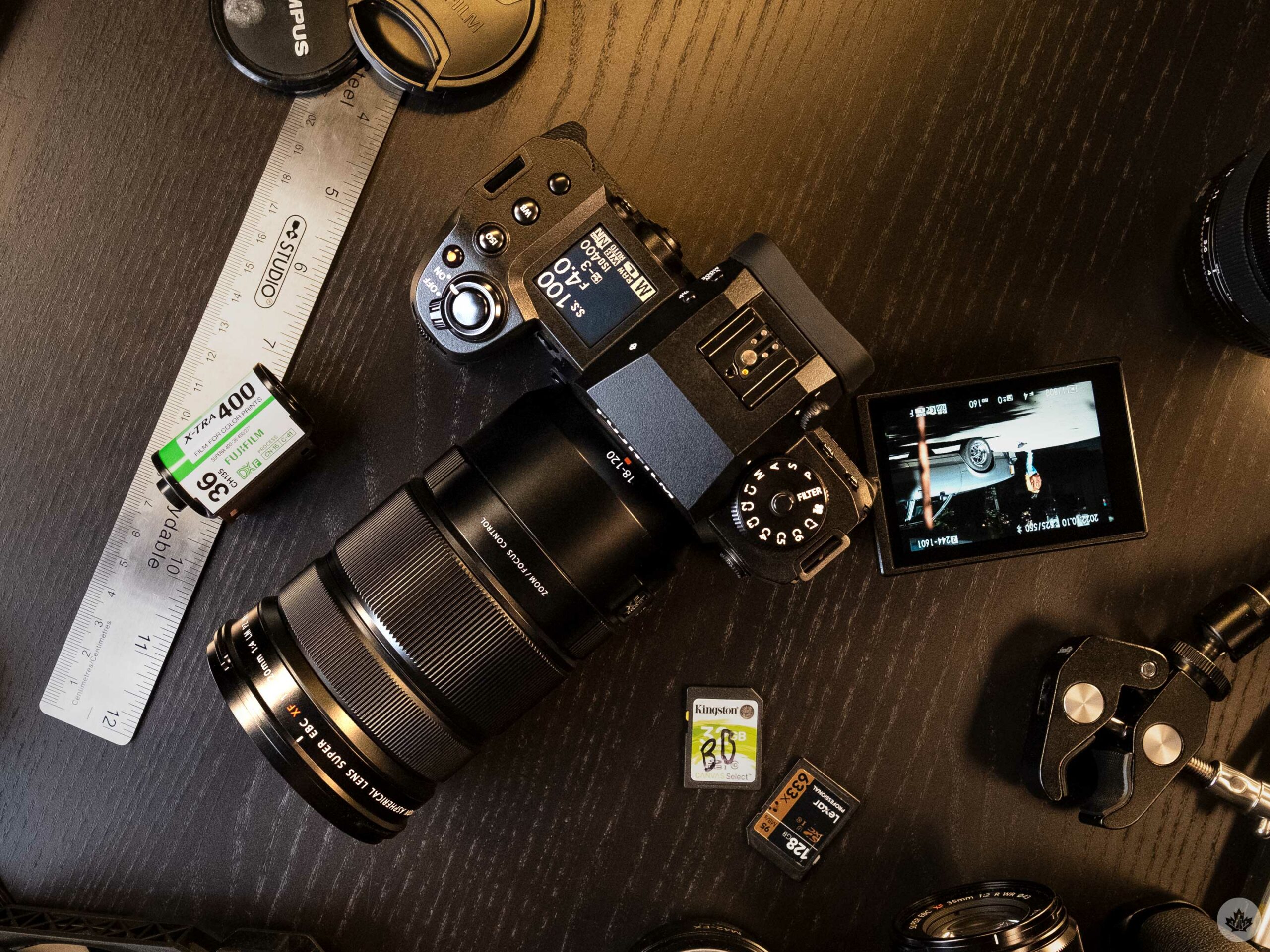 The 18-120mm motorized zoom lens has gone to the top of my wish list. It is incredibly versatile.

The battery life of the X-H2S was excellent and I was able to spend an entire day shooting on a golf course with just one battery. This put the X-T3 and X-S10 to shame. Later I photographed a wedding and only needed to charge the camera twice.

Other improvements include individual doors for the microphone, headphones, full-size HDMI and USB-C ports. This means it’s easy to recognize which plug is which. As someone who plugged my mic into my current camera’s headphone jack, I appreciated that. All ports are weather sealed, so you can take this camera in the rain, and it’ll hold up if you have the right lenses.

Rain or shine, the X-H2S performed.

Beyond these aspects, the biggest change for me is the physical feel of this camera to use. The extra power and size makes it look like you’re carrying a gun. Just point and shoot. The power of the X-H2S will do the rest. As it’s a larger camera, it’s not subtle, but it’s not bulky either. I loved bragging about it, but it’s a stark contrast to the X100V that I really took with me everywhere. This machine is bigger and more deliberate.

where it could improve 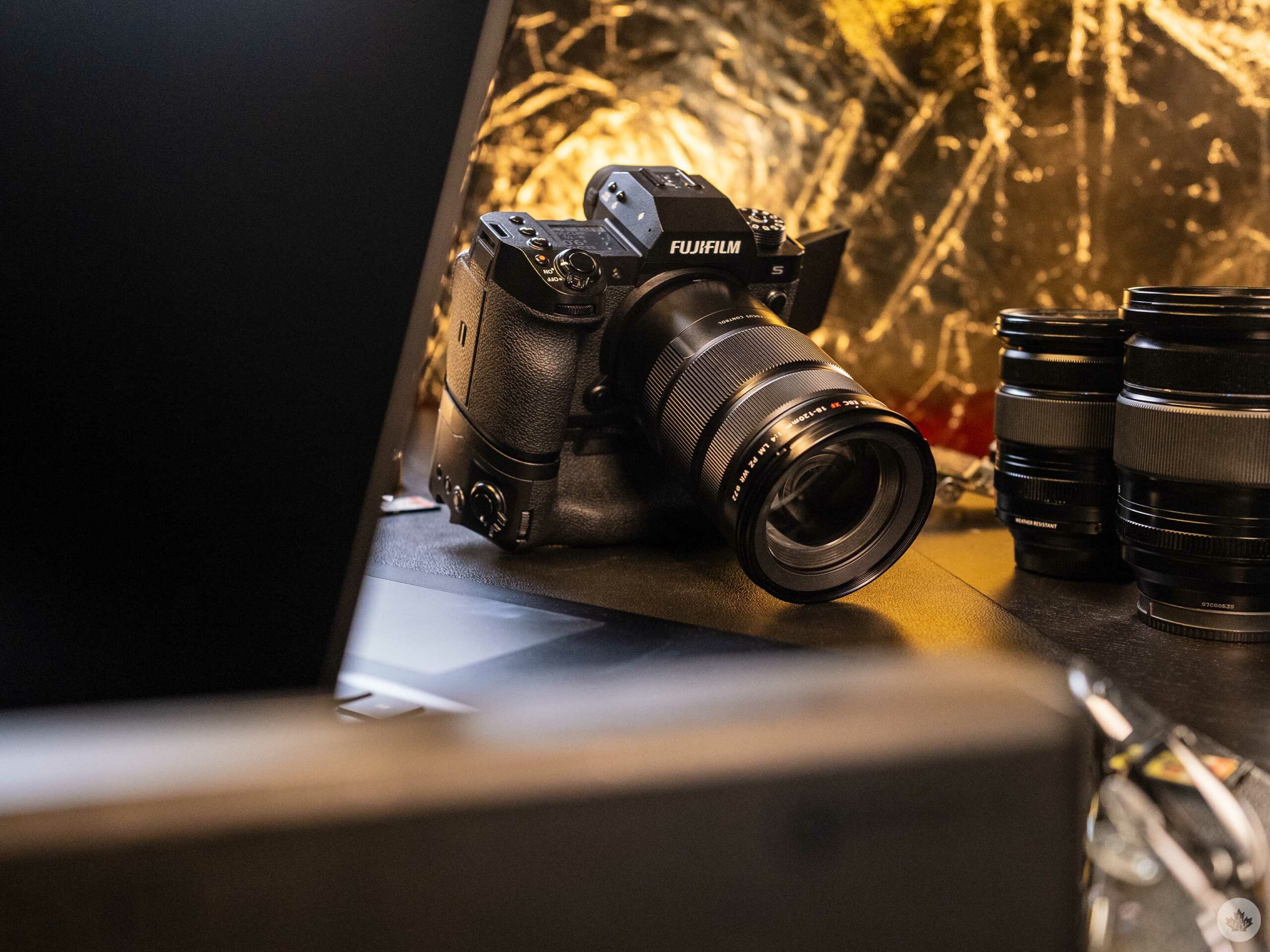 In the hand, this camera felt more like a Sony than a Fuji to me.

For starters, the joystick sits too far left on the camera body for my hands. It’s quite difficult to adjust the settings on the fly. Since the new joystick design is so unobtrusive, having it closer to where my thumb naturally rests would make it much less bulky to use while filming.

As with all cameras, the menus could use a little more streamlining and consistency. Features locked behind different modes and only working in certain cases can get frustrating. It’s fully usable, I’ve built my career on Fujifilm cameras, but there’s a steep learning curve for the menus. 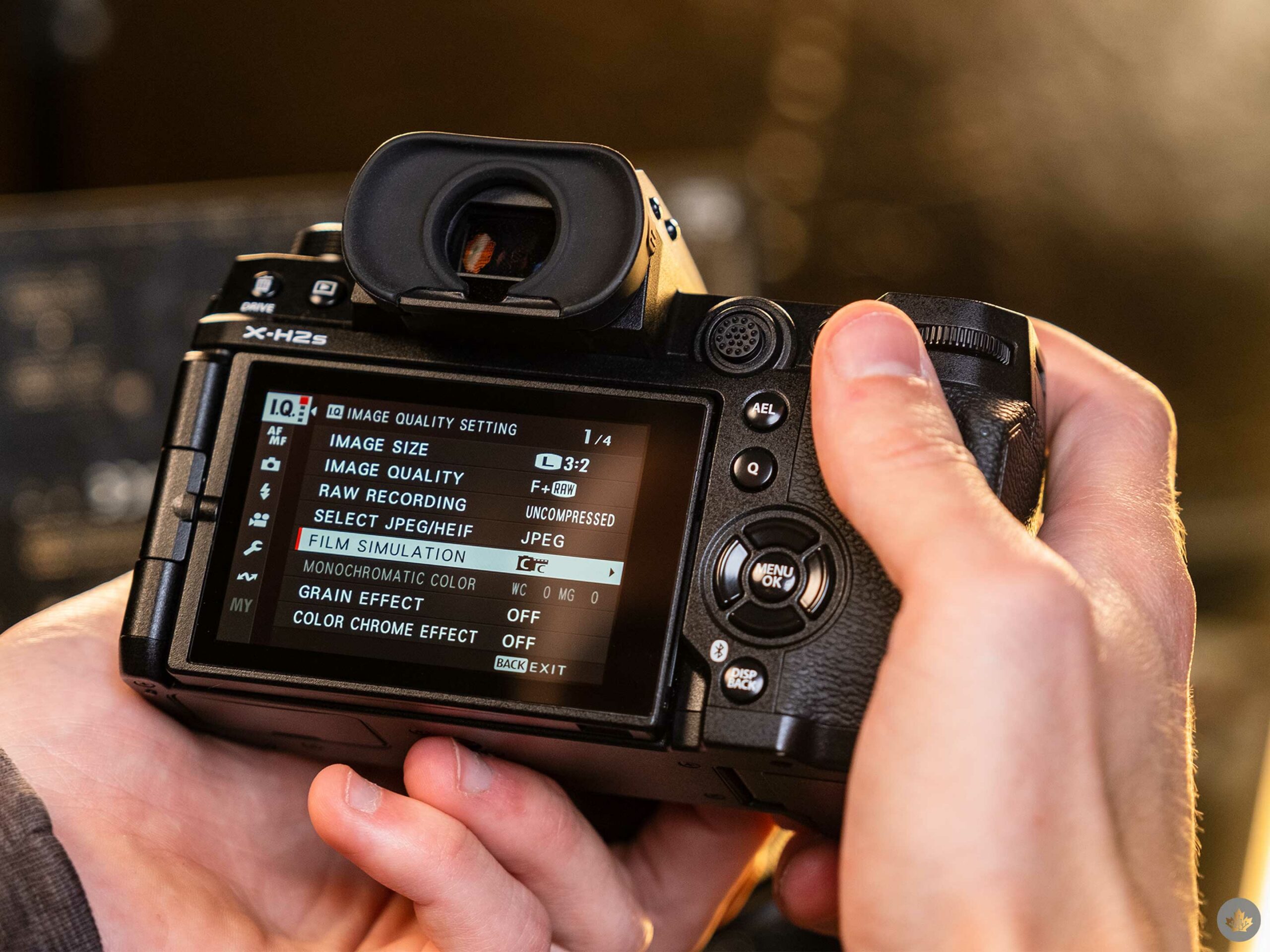 Learning the menus will allow you to familiarize yourself with the Pal2Tech channel on YouTube.

Other than that, an in-camera fast charging system would be great. I guess most owners of this camera will take multiple batteries anyway, but top of the line being able to recharge in 30-45 minutes would be a nice bonus.

There were a few times when I missed my X-T3’s dedicated ISO dial, but I was able to get used to the top button fairly quickly. Ideally, Fuji will update the camera to allow you to set the ISO on one of the custom dials in the future, which would make the switch much less jarring. 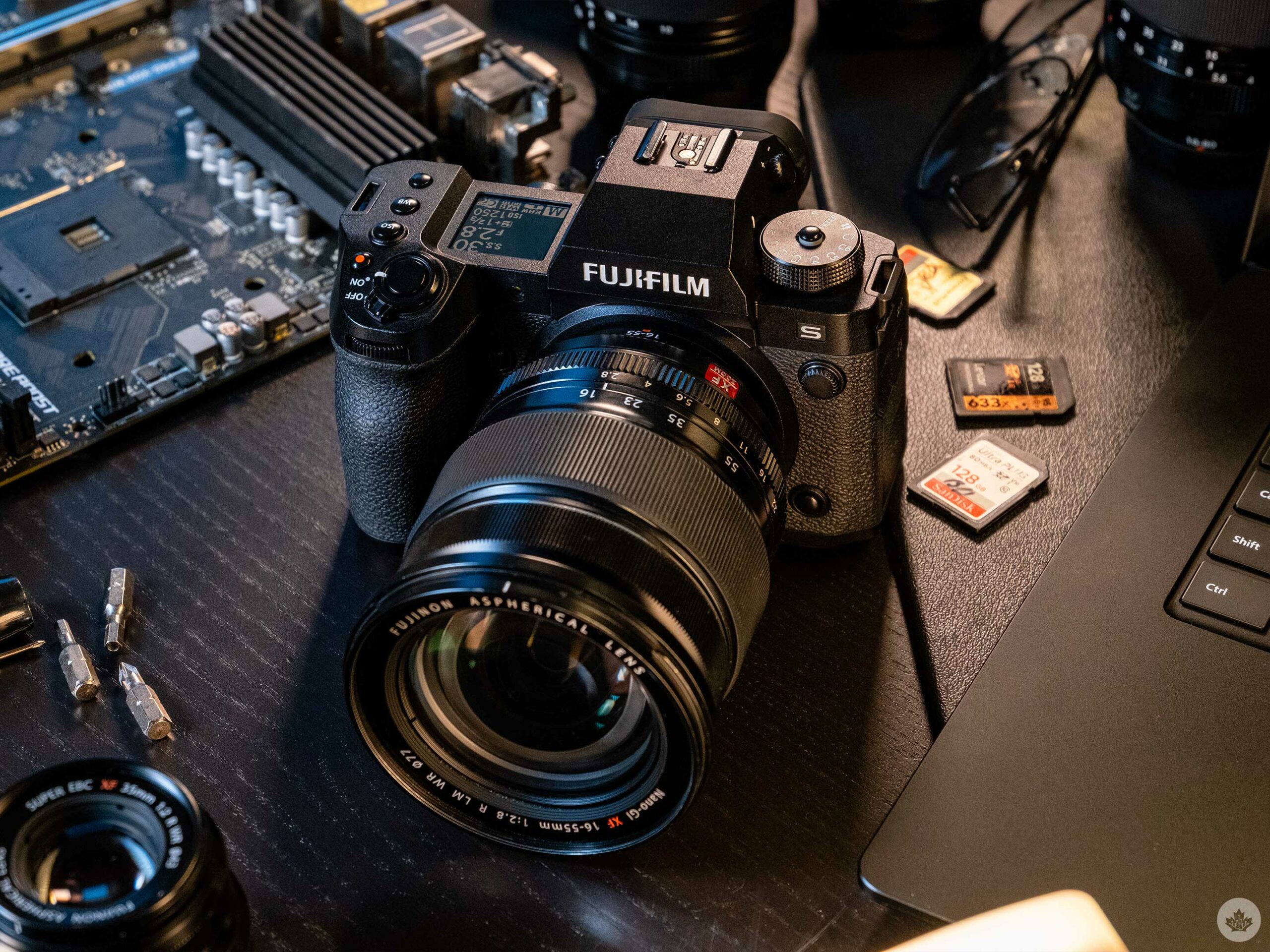 While this camera’s focus leans a bit more towards the video side of things, the photos it can take are still stellar.

The new X-Trans V sensor feels richer to me than the older X-Trans IV I’m used to, and I love it. Bringing more color into bleached or desaturated profiles like “Classic Chrome” and “Nostalgic Negative” made those profiles stand out. Others, like Astia, were a little heavier, but with 13 different profiles to choose from now, there’s probably something for everyone. 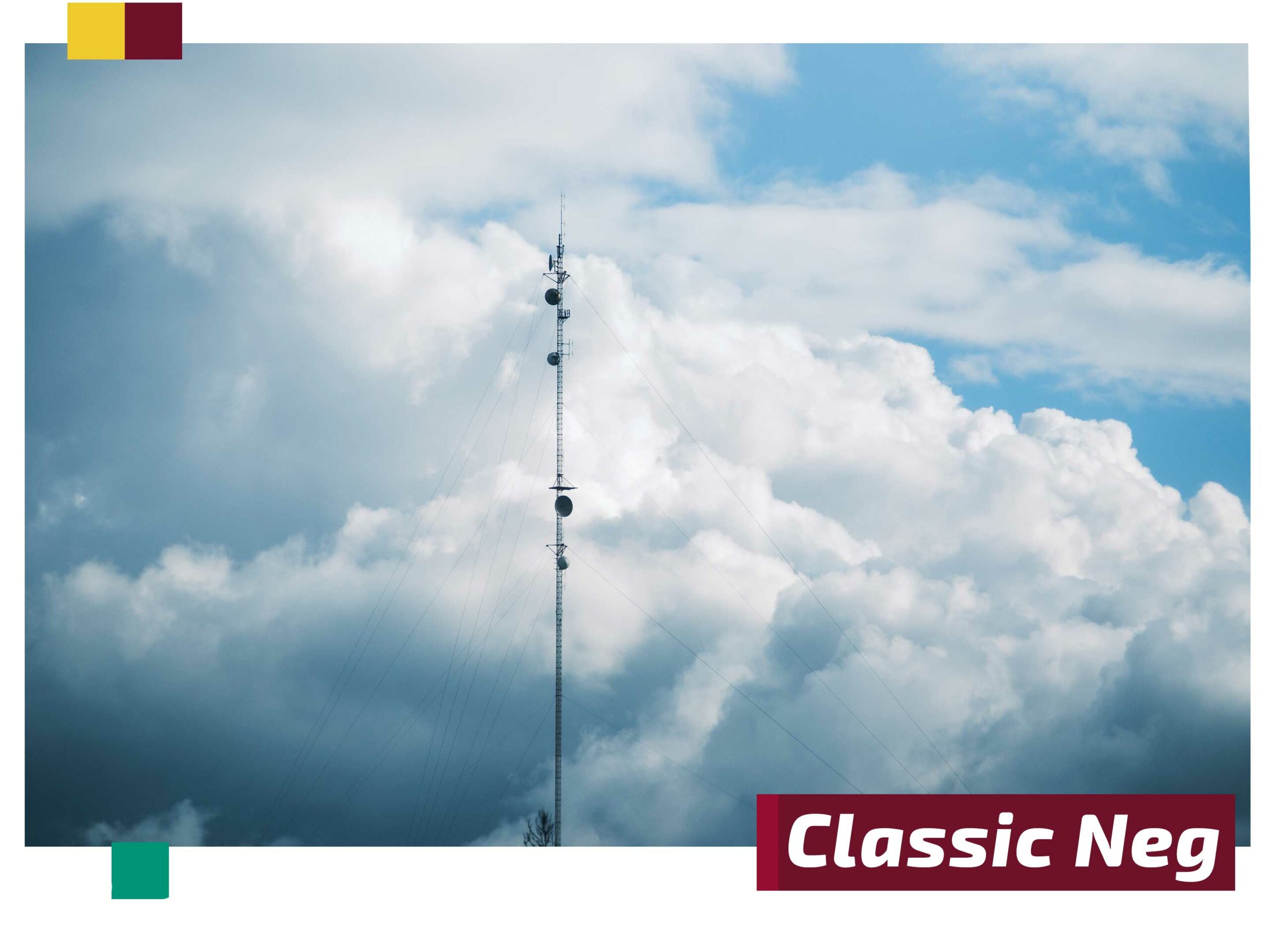 My personal favorites were the new Nostalgic Negative and Classic Negative. Nostalgic Negative in particular had a great effect with slightly overexposed images, and I loved how Classic Neg brought out the blue in the sky. Nostalgic Neg is only available on new cameras, including the 2022 X-H2, X-T5, and some of the larger medium format Fujifilm GFX cameras. Hopefully they will come to the other new devices in 2023 and beyond.

I can’t fault the 26-megapixel JPEG or RAW camera files either. JPEGs are fun to use because they often have fantastic colors and can still be edited enough for most basic situations. If you want even more color, you can save 10-bit HEIF files like some newer phones. Just be aware that these images might not be as compatible with all software later on. RAW files, on the other hand, offer plenty of data for post editing and working. 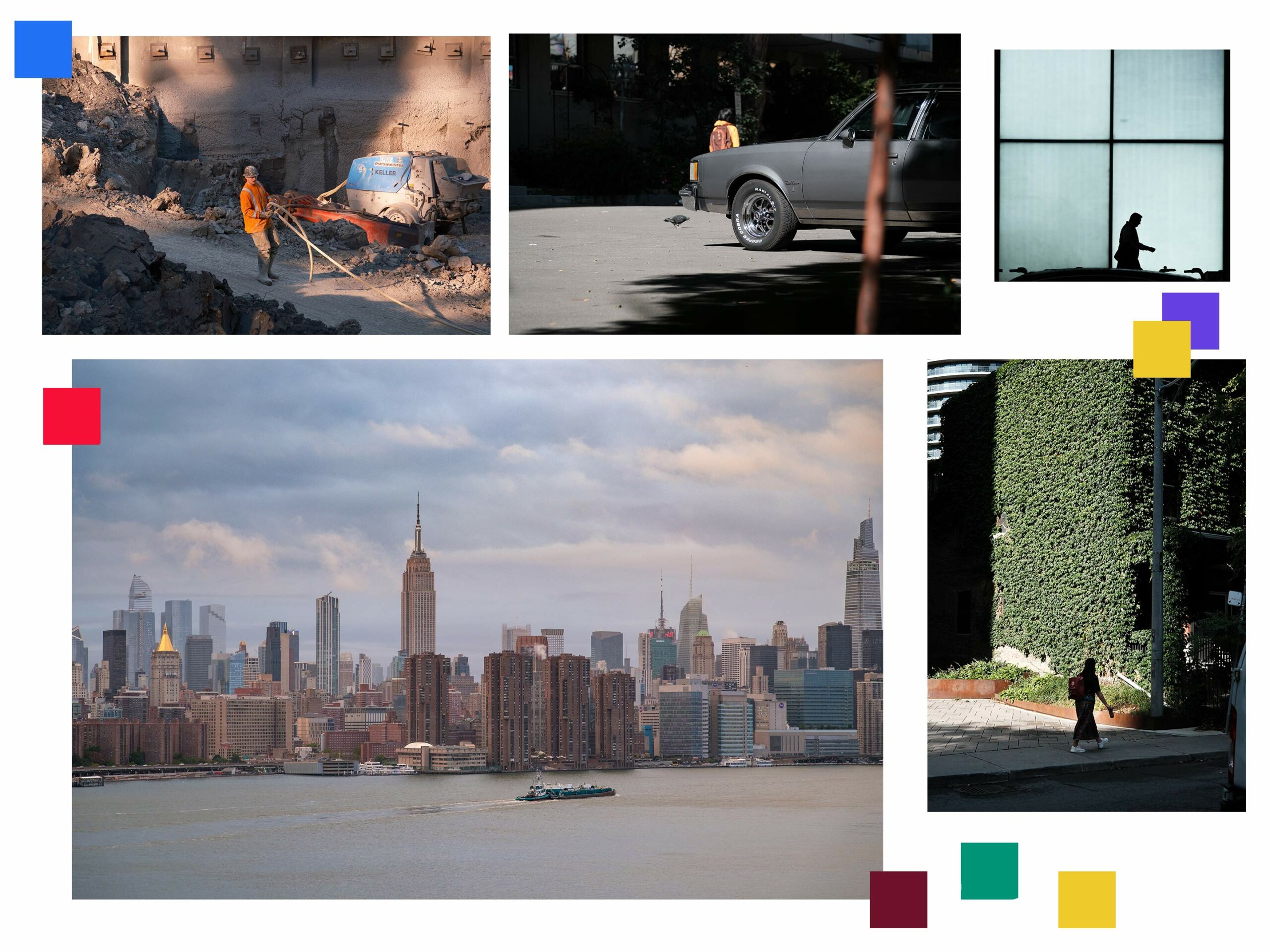 That said, the super-fast readout, good autofocus and in-body stabilization made the X-H2S a great tool for street photography. The large size and flip-up screen didn’t help much, but this camera is a sniper, and you can make it virtually silent if you want.

Another little perk that I liked was the new “Feather-touch” trigger. Coming from the silly shutter button of the X-T3 where you have to buy a screw-in secondary accessory, the simplicity of the X-H2S was a breath of fresh air. It’s also great to press, and the virtual shutter sound on this camera is Fuji’s best attempt yet. It is very responsive while giving the feeling of a good click.

~ You can view all sample images in their full resolutions and RAW files here. ~ 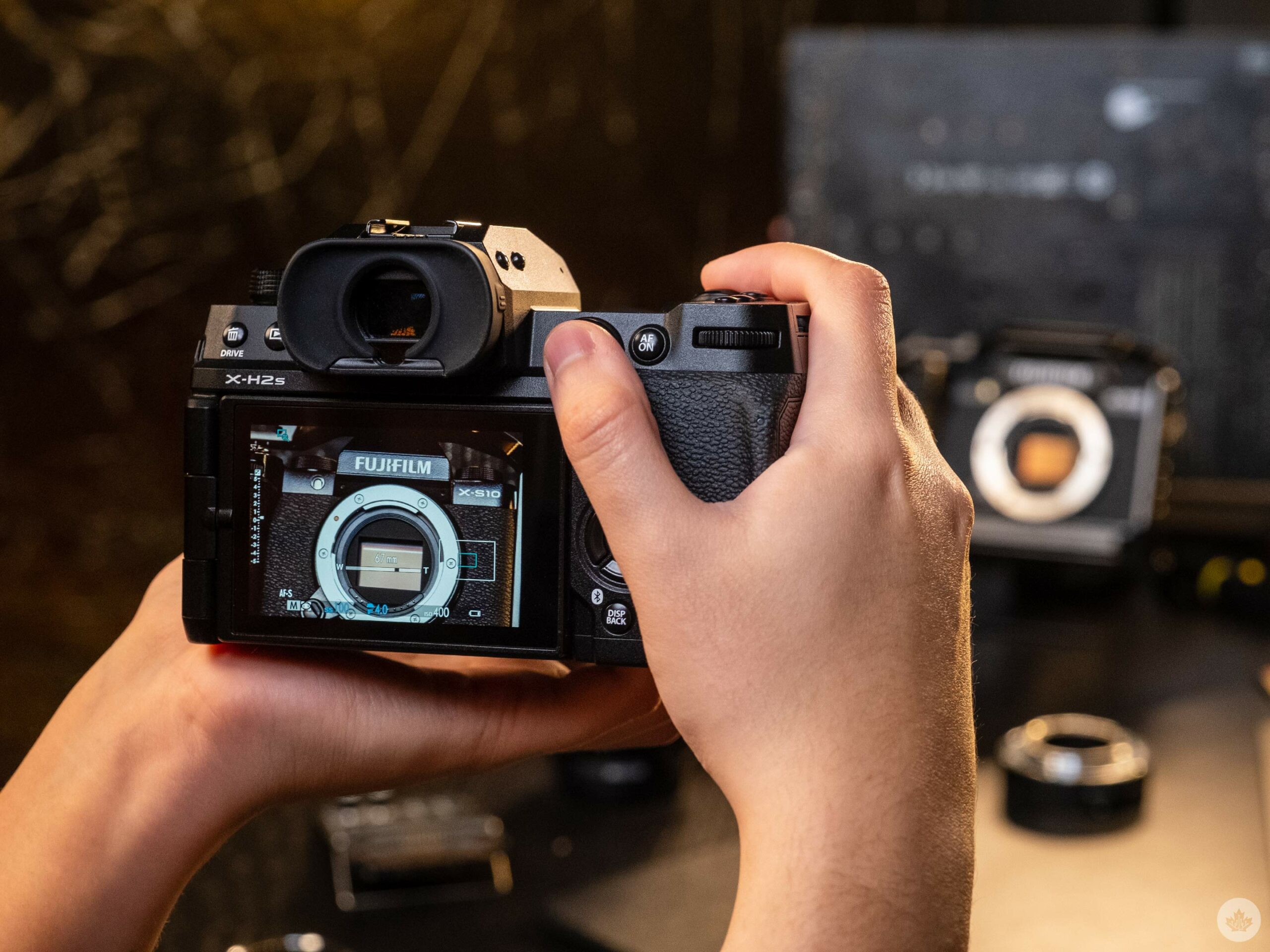 Photo reviews: why you shouldn’t be one and what to be instead