EY announces the winner of the photographic competition

EY recently announced a global commitment to go carbon negative by the end of 2021 and to mark this a photo competition was held in Gibraltar.

This was the next step after the global organization’s success in achieving carbon neutrality by December 2020, an ambition and commitment to the environment, to drive both sustainable and long-term growth.

A seven point plan has been developed and published with goals ranging from using nature-based solutions and carbon reduction technologies to remove from the atmosphere or offset more carbon than EY emits, each year “to” provide EY teams with tools to calculate, and then work to reduce, the amount of carbon emitted when carrying out work for EY clients.

This carbon negativity target was adopted by EY Gibraltar and incorporated into its strategic planning.

Part of this was to establish a visual record of the change as Gibraltar works collectively to achieve the goal of carbon neutrality by 2030.

Gibraltar’s Carbon Snapshot Photography Competition was born with the primary objective of recording examples of our current situation, of what has been achieved by individuals, businesses and the community at large.

The concept was for EY to launch a photographic competition open to all; one that had none of the usual age-based categories for registrations but instead focused on a universal two-week registration in time, in Gibraltar in October. The topic is carbon neutrality with a focus on initiatives large and small that can make a difference in the carbon footprint in Gibraltar.

Angelique Linares, Managing Partner of EY, considers that this change must occur at all levels.

“There is a lot to do for business and government; for example, our government has launched an initiative to redesign streets for people rather than cars called Enhancing Sustainable Mobility with Green Gibraltar, an example where a big change can support the green aspirations of the community at large ”, a she declared.

However, there is also a granular level in which small changes in the way we work can have a big impact when considered collectively. We have encouraged the removal of plastic bottles from our offices; supported many members of the our team who wanted to introduce a meatless Monday; replaced our conventional bulbs with LEDs and changed our gasoline moped to an all-electric one.

This breadth of thought, when it comes to identifying initiatives that can support climate action, is well reflected in the photographs submitted for the competition.

From the subject captured by competition winner Clare Francis of the rooftop solar panels spanning the shipyard buildings to the beach clean-up efforts led by The Nautilus Project and recorded by Melanie Soiza-Stagnetto, one of our finalists, the competition clearly inspired participants to think about what carbon neutrality really means to them.

“Sometimes climate action is also about inspiring others to take action and we hope our competition and the awesome images that resulted from it can do just that,” said Angelique.

£ 500 Contest Winner – Clare Francis
“I had no clear idea in mind when I decided to enter the EY photography competition and thought it was a great opportunity to walk around Gibraltar to see what green initiatives I was going to discover. . I felt the chosen theme was a fantastic idea and I felt inspired to explore the subject through photography.
“After taking several photos, I chose this image because I especially liked how much what I love about Gibraltar had been combined into this one scene.”
“The historic shipyard buildings, which represent such an iconic part of our heritage, alongside the solar panels, which represent the future we want for Gibraltar, caught my attention. The fact that I stumbled upon this image just before sunset, another beautiful feature we are so often blessed with here, made the perfect backdrop and lighting for me to capture.
“I liked how, from this angle, the solar panel roof effortlessly leads your eyes to the sea and the mountains behind, almost one with nature.”

“The image was taken with my iPhone 11 pro max, my all time favorite way to capture images on the go.”

Mélanie Soiza-Stagnetto – finalist
“The Nautilus project has been managing the Great Gibraltar Beach Cleans for four years. We will be celebrating the 5th anniversary on February 18, 2022 and are currently on the 74th GGBC with disposal of over 4 tonnes of recovered, weighed, recycled and appropriately disposed of plastic debris to date.

“On one of our many family walks through the beauty of Gibraltar, we began to witness the unsightly increase in plastic pollution scattered all over our hometown. My boys would stop the boardwalk to pick up trash, still concerned about the potential damage this could cause to our wildlife. This is where the #MedOceanHeroes program was born. They were the top two of over 200 locally recognized Med Ocean Heroes, and they still count. This led to the Great Gibraltar Beach Cleans initiative with the aim of involving the whole community in volunteer work of love and civic pride towards our beautiful Bay of Gibraltar.

“I had been to the last Nautilus Great Gibraltar Beach Clean and as the participating cohort scoured the shore I sat near the base and picked up the plastic debris in a very small radius; 1m2 by 1m2.
Microplastics, nurdles and smaller pieces of decomposed plastic litter our entire coastline. Within seconds, a substantial amount had been recovered. Social media is a very powerful tool and the photo portrays a strong and clear message of awareness of the damage we are doing to our marine life and environment.

“My photo creates a very visual impact on the harmful effects of our actions on our coastal regions. This is an image taken right on our doorstep. We are very fortunate to live by the sea and I firmly believe that collectively, as a proud, courageous and caring community, we can and must do better. “

“Little equipment was used: a sand screen, tweezers, time, patience and effort were the key ingredients.” 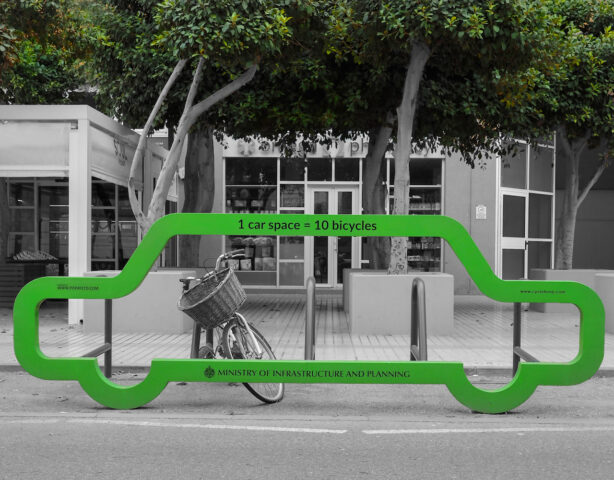 Gerry Fagan – finalist
“I chose this one for the contest because I thought it was the perfect subject for the Carbon Snapshot theme. I had walked through this area many times and there were never any bikes in this space, then one day I noticed the bike was parked so I went home to pick up my camera.

“The photograph was actually exactly what I wanted to have the wording GOG plus with the tree behind added to the green Saving the Earth message, so after getting the photo I decided to edit it in a pop style of color, so leaving all color and just leaving green visible gives it the message to turn “green”.

“The equipment used to take the picture was my trusty Olympus E-M5 MK III with a 12-40mm lens. “